How to Translate CMMS Software to Any Language

Portuguese CMMS software is widely is used in Brazil, Portugal, Mozambique, Angola, Guinea, Cape Verde, and other industrialized countries. Unfortunately many of these systems are inadequate when it comes to reporting and analysis of CMMS data. In this example Portuguese is used for the CMMS translation, however this applies to any language. Some of the more popular CMMS translation are: Spanish, Russian, Chinese and Arabic. Besides simply translating the text the software also uses the regional setting for the country and culture where the translated CMMS is being used. The implications of this are that the currency symbols, decimal separators, and most importantly date format are automatically used throughout the software and reports. The result is a customized CMMS that fits everywhere in the entire world.

Logging In to The Portuguese CMMS Version

Login to the CMMS software using Portuguese language settings. All text, reports and messages immediately translate to Portuguese. The items (in the picture on the right) in red are the translations available in the demo program. When a new translation is created by the user it also displays as red text in the language selection drop-down box.

In this case the picture on the right is displaying the bypass login buttons. These would usually not be the typical way to log in to the software and are available to demo users to make it simple to log in while testing the demo. Instead, entering a user name and password offers better security and is the default way to log in and use the CMMS. Other benefits of logging in with a specific user name are: 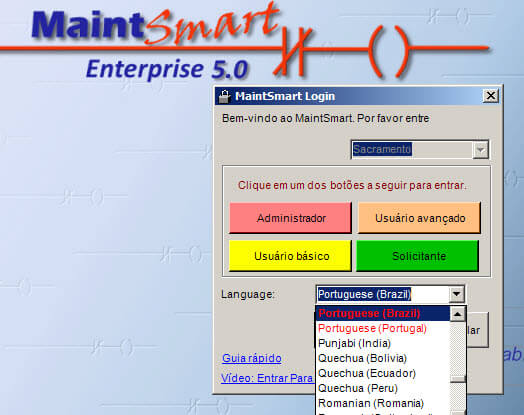 Logging in Using a Portuguese Translation

Modifying and Customizing a Translation

Customize You Translation of Any Language

Translate all literal text, report text and message text to the language of your choice. We provide several Google translations that may be edited as needed to provide a very accurate translation. The video (above right) instructs on this topic. Additionally we encourage you to contact us for a free, no obligation online demonstration of the CMMS translation tool.

Our trial version of MaintSmart contains the following languages:

Request a personal online demonstration of the CMMS translator in action.

Thanks for your message! We’ll be in touch soon.